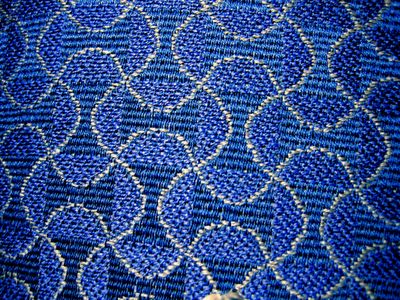 Whoever is looking at this should know what it is. When i looked at this pattern for a while i think i actually found why it is such a good pattern. First it has a checkerboard pattern, then wavy lines going verticaly and horizontaly, then interlocking pieces and finally capsule shapes. It seems good patterns are more complicated then one simple pattern.
at Tuesday, May 31, 2005 4 comments

I saw the Star Wars movie on sunday and thought that it was really good. It is definitly not a happy movie. I'm not sure if it is really PG13. But i'm not 13 so i don't care.

I also played Psychonauts, a videogame for Xbox, all weekend. I have to say that it is probably the best designed game I have ever played (except halo). I never got stuck in it because there where always people who could give me little hints. And every single level was different from the last. The levels ranged from: normal plateformer, godzilla destroy city game, risk board game, crazy upside down curvy neighbourhood conspiracy level, black velvet painting word, crazy meat circus, cube planet, dance party, under water bubble, a skewed insane assylum, summer camp and probably some others. The only problem is that it was too short.

I have answer to games that are too short. Instead of making really long games, sell one game disk with multiple episodes. So instead of having 1 main story line, have 2. You will feel as though you have accomplished something when you have only finished half the game. I hate renting a game, and thinking it is the best game ever and finish it in one weekend.

Also, what made psychonauts so good was the dialogue. I think this is the first game that had a cutscene so funny that actually laughed out loud. I found the actually Movie clip ,scroll down to official movie 4 and click stream.
at Monday, May 23, 2005 2 comments 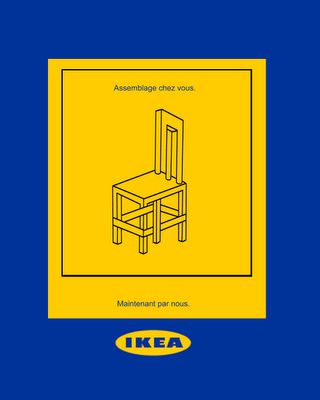 This is an advertisement my group made in FLA class. It translates into roughly, home assembly, can now be done by us. I did the actually picture and think that it is a very well done optical illusion.
at Wednesday, May 18, 2005 3 comments

Well yesterday was the last day of the Western school film festival. The winners were

My movie, Enrikey did not win. But i don't feel too bad, because from seeing the movie that won, they were definilty not the movie that should have won. Ninja, a movie about a Ninja was definitly the funniest movie, and if i had to pick, it would have been the best film, yet it was not picked. Also Pedal files, which is a trick biking movie, was probably the best sport film, because it definilty had the best trick biking, but i wouldn't conisider it to be the best film. There was another skate boarding movie that had way better film quality. And the Ninja movie had a much better story then a biking movie with no story and whose climax was based on someone crashing so badly they need five years to recover. I have a feeling the winners were based more on the votes of the audience then by the guest judges, and because one of the films may have had more people who were friends, they had an advantage. So next year, it has to be a bigger audience to be fair (put it in the gym and fill it up).

Winning something in the film fest would have been nice, but i actually feel just as good knowing that i made an animated movie completely by myself. Which is something i wanted to do since i started doing computer animation. My reward was much better then a Golden Chicken or Golden Tape

Not sure right now if i want to make another. I will probably be bored in the summer and end up starting something even harder.

My movie was shown

Today at lunch my movie was shown in the school film fest. I think everybody liked it. It started playing without sound, but Brad (who was in charge) stop it and got the sound working so everything went well. I suspected that people wouldn't laugh out loud at it ( i didn't mean it to be funny) and they didn't.

I also heard today from steven about the Xbox 360. It will be awesome in every way. From what Steven says, it has 3 3.2Ghz processors and tons of other stuff. For everyone who is not a halo fan, this has no meaning, but for me it is a big deal. 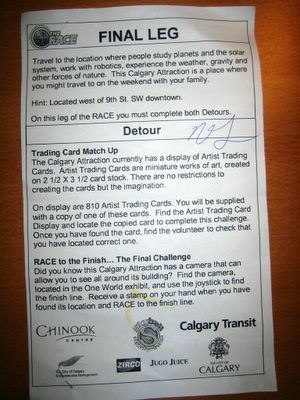 You can see what we had to do on the clue, not too complicated, but there were so many teams that there was really no way to beat people because of all the lines. Thank mike for getting us into 13 place instead of 14 by getting us to take a slightly faster route down some stairs. I think that if you read the clues, you can get a pretty good idea of what happened in this race around calgary.
at Tuesday, May 10, 2005 1 comments 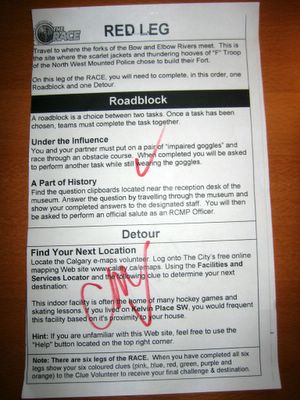 We did the the Under the influence Roadblock which involved wearing Drunk glasses and walking through some cones, and then attempting to throw a basket ball into a garbage can twice consecutively. This proved to be very difficult, but once we were close enough, it wasn't too hard. The Find you next location event was sort of stupid, because we only had one computer to use and the internet was very slow. If it wasn't for this wait, we would have had a better chance at placing higher.
at Tuesday, May 10, 2005 0 comments 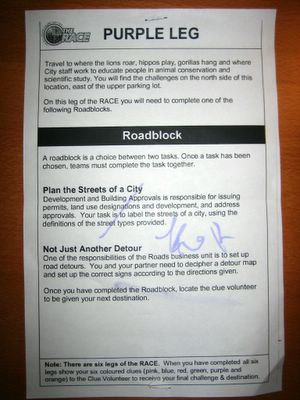 We then had to go to the zoo. Here we decided to do Plan the Streets of a City. We had to name roads with endings such as Court, Way, Drive, Bay, Cresent. We got all of the streets we named correct.
at Tuesday, May 10, 2005 0 comments 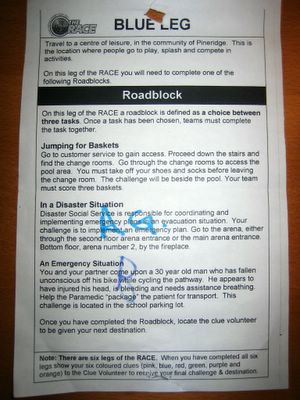 We then had to travel up north the village square leisure center. We did the Disaster Situation. We decided that the best place for an emergy center if there was a 6 alarm chemical plant fire in the south east was to use SAIT. Thanks to mike we didn't make a mistake that i almost made.
at Tuesday, May 10, 2005 0 comments 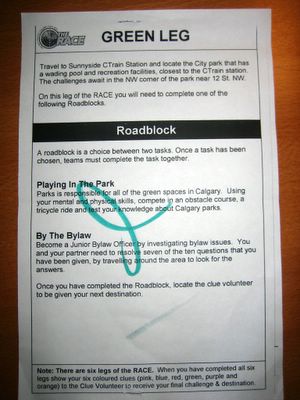 We decide that the fastest way to get to this checkpoint was too walk about 6 blocks and catch a bus. We had to wait for the bus, so we ate our lunch, and through some unknow turn of events, one of Mike's old friends appeared. Such a weird conicidence to meet up with somebody who shouldn't really even be in the area is weird. We got to the Roadblock and decided to do the Playing in the Park activity, which was to ride on a tiny bicycle and tricycle and answer some questions.
at Tuesday, May 10, 2005 1 comments 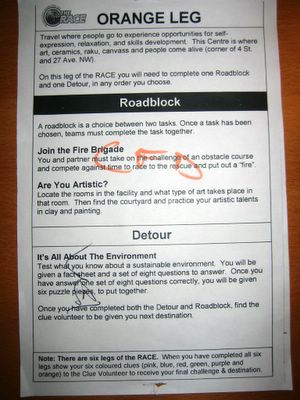 We then got our 2 clue. We had to travel to the North, so we took the train to downtown and caught the 3 or 2 going north, can't remember. On the train, some of the other teams noticed how organized we were and decided to follow us. But using our super speed, we were able to loose a few of them. The fire brigade event wasn't as fun as last year with a real fire truck and hose, but it was ok. And after running, the Environment Detour was sort of hard, because we had to think after we ran alot.
at Tuesday, May 10, 2005 0 comments 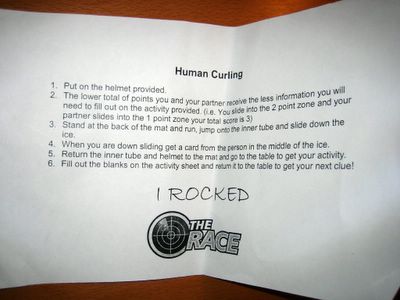 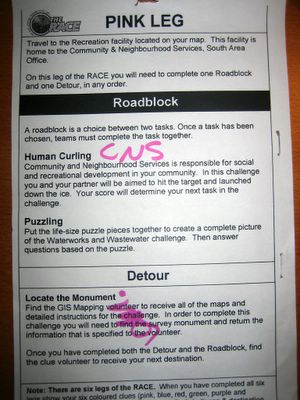 With this first clue, we made our way to The Jimmie Condon Arena, next to Heritage station. We made our way into the arena and did the human curling event, we scored 2 points when the best was 0 and the worst was 4. For having a score of 2 we had to make up an activity for youth, we decided on a winter camp thing.
at Tuesday, May 10, 2005 0 comments 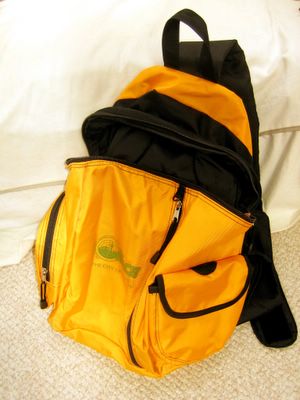 After getting that letter, we left for chinook center. There were 150 teams, so 300 kids were running from Chinook station into Chinook. It was crazy. Once inside chinook we found a giant circle of tables manned by all the different business in the Mall. The first challenge was to have a fake interview with one of the business, we had ours with Sportcheck. After the interview we made or way to Le Chateau where we picked up our backpacks and first clue.
at Tuesday, May 10, 2005 2 comments 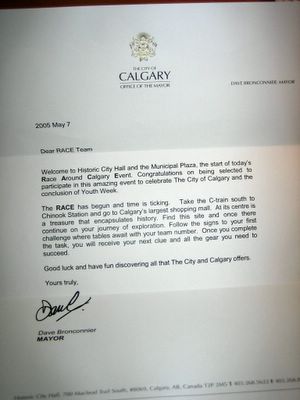 This is the beginning of the Race around Calgary blog, you will have to read up from here.
at Tuesday, May 10, 2005 0 comments 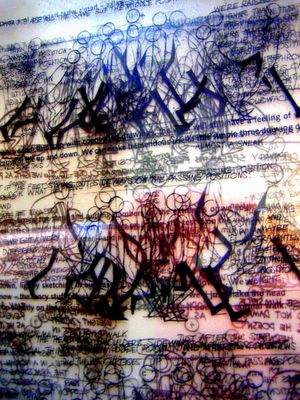 This was all the transparency from my Fla project on animation, all stacked together.
at Saturday, May 07, 2005 4 comments 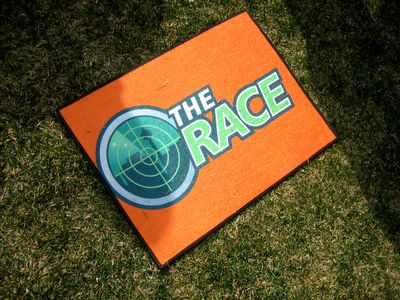 The ending mat, alot like the amazing race, except no host was there to great us.
at Saturday, May 07, 2005 1 comments 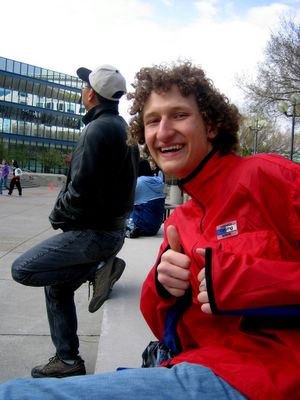 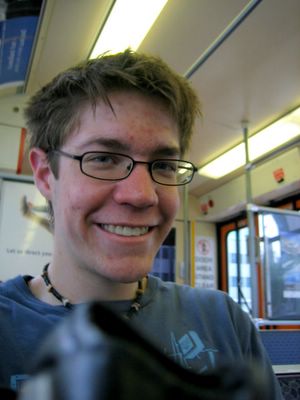 Finally a picture of me (first one on the blog) during the race on the train downtown.
at Saturday, May 07, 2005 1 comments

The race around calgary

Mike and I placed 13 in the race around calgary. This is 13 out of 150, so it is not bad at all. I am so tired that i can't write anymore at the moment, though i should have a larger update later.

I will also have a post about the physics olympiad, but that will take time also. 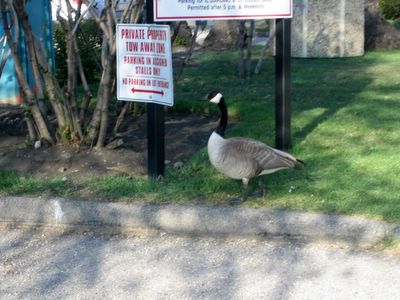 Weird, i saw this goose last week in the exact same spot, and again he was all alone in the middle of downtown
at Tuesday, May 03, 2005 2 comments 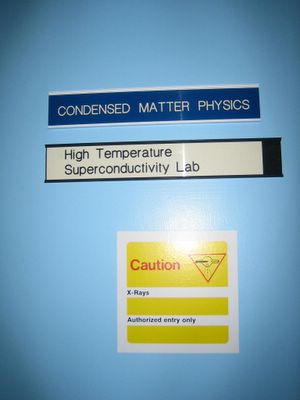 Well i am back from the physics olympiad. You are going to get a full 12 page story, but that will take at least a week to type up (i wrote it on the bus home). All i can say now is that it was lots of fun. And hopefully this pic speaks for it self
at Monday, May 02, 2005 4 comments