A while back, I read the novel "Do androids dream of Electric Sheep", written by Philip K. Dick. This book was the inspiration for the movie Bladerunner, which I have yet to see in it's entirety, only the last 15 minutes.

In the book, a device called a "Mood organ" was described (think music pipe organ, I don't think it is supposed to be as in part of the body organ). I found the wiki description of it:

Another device from the novel is the "Penfield Mood Organ," named for neurologist Wilder Penfield, which induces emotions in its users. The user can dial a setting to obtain a mood. Examples include "awareness of the manifold possibilities of the future," "desire to watch television, no matter what's on it," "pleased acknowledgement of husband's superior wisdom in all matters," and "desire to dial." Many users have a daily schedule of moods.

So a mood organ really just links directly to your brain to make you feel how you want to. I immediately knew, like many people probably would, that there must be something wrong with this whole system, one of those "too good to be true" things.

From what I remember, the Mood organ was never really explained much further, or discussed indepth. But for some reason it bugged me to know, that in the future if we ever had such a thing, there would be something wrong with it.

And then I realized something surprising. Most of use already have our own version of a "Mood Organ".

How are these Mood Organ? Well, music, video and games all affect how I feel. Usually, each will induce the same emotion repeatedly, and each of them I have completely control over if and when I want to use them. The only difference between these and a true "mood" organ, is that the input must pass through at least some of my senses before getting to my brain, I don't have electrodes melded right into my skull.

And from what I'm thinking, my Mood Organs will probably end up working better in the long run then anything that is directly attached to brain. The reason for this is as follows:

When ever I listen to music, I only ever can really get the full effect of a song for the first 20-30 plays. After that, I never get the nice spark of excitement, or happiness, or sadness that should be coming with the song. My guess, is that just the same way that our bodies adapt to exercise or drugs, or caffeine, we can adapt to things that induce emotion. We always need new music to keep our "Mood Organs". I I think that any real brain inducing Mood Organ would probably stop working soon after starting, we would just get too used to it, and it would lose all effectiveness.

My mood organs can always be keep fresh with new content. I don't think we are any where near the limit of what emotions can produced with media and the such, especially with video. It seems that if I can play geometry wars and see about 300 enemy shapes and the screen, I should be able to deal with much more complicated visual input than what we see on TV.

This whole idea that content needs to be made to help keep us happy (in addition to the usually family and friends and real human contact that can make us happy), was actually sort of cool. It means that all art actually has a fundamental purpose, and wasn't made in vain.

In a later post, I may just explain how this idea actually makes the entire evolution of man make sense in my mind. 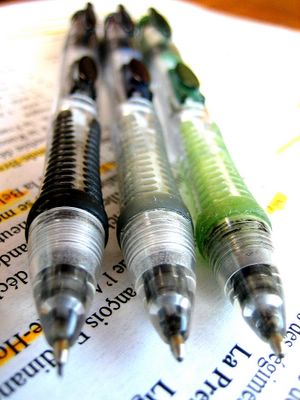 Due to the constant use of a pencil case, I have been able to use one mechanical pencil per year of highschool. So from right to left, we have grade 10, 11 and 12. Theoretically, the black one should be the smartest, since it did do all my grade 12 work for me.
at Sunday, July 02, 2006 5 comments