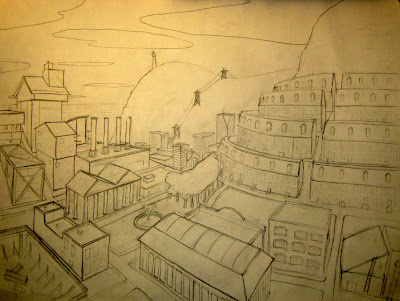 Our project in analytical drawing was to draw a city on hills in perspective.
at Monday, September 29, 2008 0 comments

Once again I am returning to Speed Racer.

One complaint about the movie is that there are moments when the little brother and the monkey interrupt incredible key moments of the film. They weaken the emotions that are being built up by the more important scenes. At first I agree with those who critized this type interruption as being bad because it weaken the emotional strength of the scenes.

However, I now have a theory which I think explains why the monkey and brother are actually used in an important way to help the overall film.

My theory begins with basic movie form. Films should be designed in a crescendo form. They start weak and build strength as they approach the climax. The climax needs to be the moment of greatest emotional strengthen. Notice that I didn't just say of "great" emotional strength. I said "greatest". Therefore if there is a moment in the film before the climax which is stronger than the climax, there is a serious flaw in the film's form. The audience is expecting the climax to be the strongest scene, and if it isn't, they will be disappointed.

So to return to the example of Speed Racer. There is a scene about 1/3 of the way through the film in which Speed and Royalton are engaged in a heated debate. It is very intense. In comparison to the climax, I don't believe it has quite the strength, but it is fairly close. However, the filmmakers decided to intersperse this scene with cuts to the brother and monkey messing around. I thinking this was done to intentionally weaken the argument scene so that it more effectively rests within the greater context of the emotional rise of the film.

I think this is a very good example of how film needs to be seen as a whole as opposed to various parts attached together.

I don't think the last service I used to host this file was any good. So for anyone still interested in download our Jam album. Here it is again.

Hopefully this service will work better. That is what I pay for (free).

I have a suspicion that the belief that breakfast is the most important meal of the day is wrong. My evidence: I haven't really had breakfast in the last four months. I haven't felt anything wrong with my body and have actually noticed that I don't need a mid morning snack anymore.

My main theory of why not having breakfast works so well is that by not eating for the eight hours you sleep, your bodies energy system will begin eating away at it's stored energy. If in the morning you have a small breakfast, you will cut the stored energy process off and simply use the new food as your energy in the morning.

By midmorning you will have used up all the energy of your breakfast, and your body will attempt to restart the process of using your stored energy, but it will be of no avail and you will be hungry before lunch.

Therefore there is no point to breakfast. Maybe if I woke up at 6 in the morning, and only ate small dinners, than it would make more sense, but not in my current life.

Well Kris just asked for closeups of the drawings on my res room wall. I can do one much better than that. Here is a link to a photosynth of my residence room.

Photosynth of my Residence

Unfortunately you will need a windows PC to be able to install and run the software necessary to view it (parallels on a Mac won't even work, however Bootcamp will). I think they are working to make a Mac viewer for it also, but I wouldn't count on it anytime soon.

For those of you who can't see what I've made. I took hundreds of pictures of my room, and then the Photosynth software has calculated how they all line up in 3d space. It then allows you to explore the images in 3d space.

If you search around the Photosynth website there are videos and things that help explain this concept further.

I've always been excited about the prospect of new technology in the future. I remember when I was little, I felt I would be satisfied if video games were in 3d and looked as good a some early CG rendering I had seen. Those hopes have long been satisfied. This month however, I almost feel as though I could say we are on the edge of a completely new era in technology.

The reason for this is that I got an iPod touch. For the first time I feel as though I can easily carry around most of the abilities I need to exist in contact with the internet. Before this time I would have had to carry around a laptop which simply isn't feasible. Wireless internet is now just about prevalent enough that it can be found almost anywhere (at least in Montreal) with a little bit of searching and luck.

Previously being up to date with the internet made me feel as though I needed to be tied to a computer. I almost felt that with the internet everywhere it might grow to eat up more of my time, but what I have found is that I feel more liberated than anything.

I've always been a technophile, and I am generally willing to bend over backwards to have my technology work. This is one of the first times that I have felt that overall, nothing has been complicated and I have not sacrificed anything.

I guess what actually has just happened is that I have witness a new advancement in the process of memetic evolution.

Here is a picture of my residence. 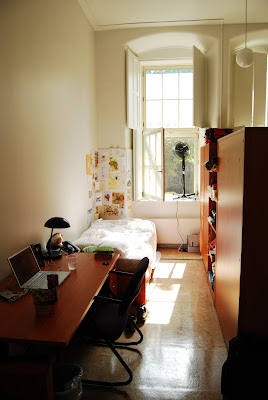 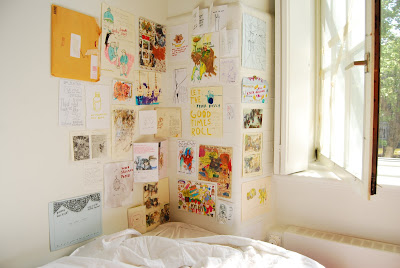 Unfortunately I was in Montreal for a week before I was actually able to move into residence since my room was still under construction. We were put up in a hotel and had the pleasure of air conditioning.

Staying at the hotel was a stroke of luck since that is where I met one of my new good friends, and we probably wouldn't have met as quickly if we hadn't been forced into staying in a room together.

The drawings that are shown in the photographs are the contents of a package I was given to open on the plane between Calgary and Montreal from my best friends in Calgary.