I just check and I have about 10 000 pictures in my pictures folder.

This may seem excessive. However, countless times I have been lost for a subject for a drawing, or a card, or some other thing that I just have to make.

I have 2 options for coming up with an idea.

Open up Picasa and scan through all of my pictures. Within minutes I will probably find something that will work for pretty much anything. Plus, the bonus is that I can take credit for the photo and don't have to give any credit to an internet source.

I have used this second method successfully about 10 times. My new physics theory, my next film idea, and my city painting are examples all came out of this method. What is it? I turn on some good music and play geometry wars. I no longer have to concentrate mentally on playing the game, so I can still think about other stuff, but I am distracted enough that for some reason I can get ideas really quickly. Plus I get the bonus of playing a video game. 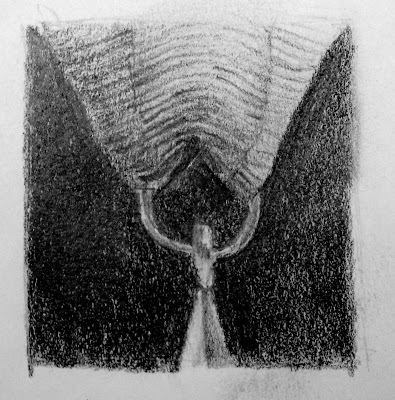 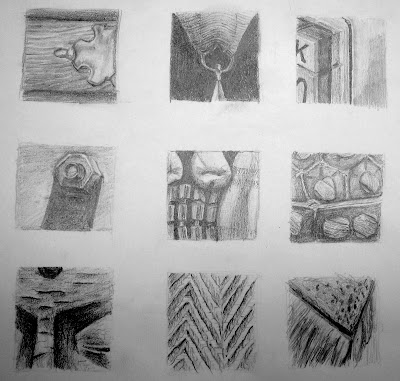 Textures from the Glenbow museum, we got to go on a field trip, just like the hundreds of school children who were running around the museum. I highly recommend the new Maverick exhibition that they just finished, it is really cool. 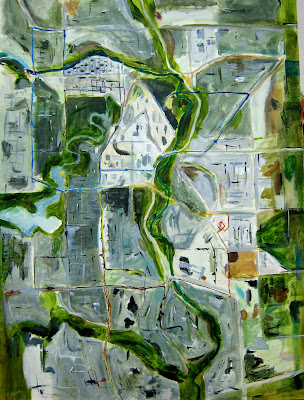 Here is the finished Calgary painting. 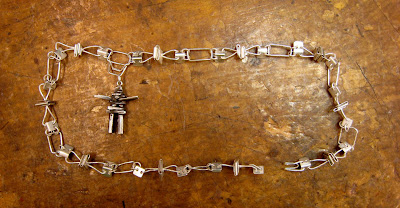 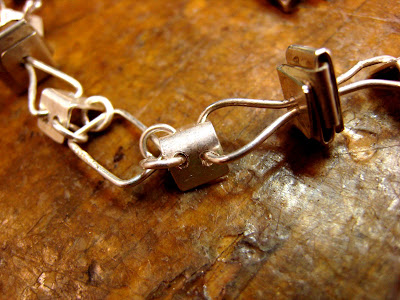 And my final Jewelery project. I didn't make the figure, most of you have seen that before, but I made the necklace. I'm really happy with how it turned out. 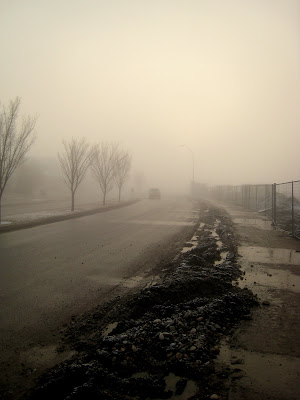 Calgary from above *NDA* 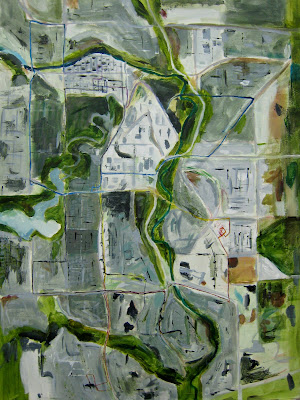 I had a very interesting interview with the company *Non Disclosure agreement censorship*. I saw lots of cool stuff *NDA censor* and was test in various ways *NDA*. Unsure at the moment if I have summer employement, but thankfully they did seem to like how broad my knowledge and skills are.

Hopefully I haven't gone against the *NDA* by mentioning it *NDA*. I just thought it was cool that I even got to sign one.

And here is a recent painting, the building in which I signed the before mentioned NDA is represented on it.

Here I will try to explain better.

Absolutely everything is made of the same stuff.

What do I mean when I say the same stuff?

I will start with light because it is the easiest to translate. As most people know light is a wave, it has a frequency (it is not a particle, just acts like one). All waves need a medium. Lets just say that space time is this medium. I'm not sure what this is or anthing, but that doesn't really matter. Light is just waves.

Now suppose we are to think about electrons, they orbit around nucleus in well formed shapes. Now imagine that they are not particles spinning around in the orbital cloud, but a wave flowing around the orbital. A wave that is travelling through the same medium as light. This wave has a different wave form, amplitude, frequency. It might be spinning in place, or rotation around, I just don't know, but it is a wave.

Now suppose we think about electron orbitals movement for a moment (think SPDF). When light hits an electron, it can raise the level at which the electron existing. I suspect that this occurs by a means of interference between the light and the electron wave. Since they exist in the very same medium, we can easy imagine how interference can occur. Previously, I have never heard a way in which the collision actually happened (reason why I like my theory).

Now electrons are waves, so I might as well say that protons and neutrons are waves also. I suspect that somehow, their waves would interact in such a way with electrons that they make some sort of nice standing stable wave. And that is the very reason they exist in harmony so nicely together, why they are attracted. Simply due to the way in which all of the waves work together.

As for the really subatomic particles (quarks and whatever) I would very well suppose that they are actually parts of the waves that form a nucleus, since there may very well be a very interesting waveform that makes up the larger parts.

As for the interaction between waves, you should remember that just like particles, they actually exist in 3d space and need to hit each other to interact. I suspect that they would also be really complicated waves, not nice simple harmonics that we see on strings and in water.

What does this have to do with dark matter?

The reason for needing dark matter in the universe is that we seem to be missing a bunch of mass when calculating gravitational forces.

I am proposing that this dark matter is really not matter at all that we are missing. We are just not looking at energy as a part of matter. I suspect that if we were able to incorporate energy into our calculations of gravity etc, we would be able to actually get conclusions without resorting to stuff we can see and can't really detect.

E=MC^2
mass is equivalent to energy, and should therefore be considered in all gravity calculations

If my thinking that everything is made of the same stuff (waves in space time), energy should be incorporated into gravity calculations.

Gravity might be caused by the interaction of the waves on space time
( Analogy of above)
Suppose you have an elastic that is just about to be stretched. Put two waves on it at different points. The elastic is now slightly longer, meaning there is a strech in the elastic between the 2 waves. What if this stretch, this tension, is actually gravity? Gravity trying to conteract the force of these 2 waves(obects/mass/etc.)


I think those are all of the good reasons I have for thinking that energy needs to be considered into dark matter theory.


(Other random points on the dark theory stuff)
Kinetic energy does count in for sure, since how a wave is moving, will affect how it is stretching the medium of space time, and therefore gravity.

How this affects my views on the big bang.
Previously, the only way I could image the big bang actually working was some sort of super, duper incredibly dense black whole thing that held everything in the unverse in something smaller than an atom.
I propose that we can see it in a much different way. We can see it as the smallest possible frequency wave, yet have a magnitude so great that all of the energy and mass of the universe could exist in it. This theory really doesn't have anything to do with insane amounts of compression with which I am uncomfortable.


That is it for now, maybe tomorrow I will do even better.


If anybody wants to know how my theory would deal with the dark energy issue, I think I might have that covered also, though it might be against one law of conversation of energy (but who cares).

Physics Alert: Theory of Nothing

Apparently physics still is not out of me, it is still well embedded in me and I have recently been bitten by the physics bug since I listened to a basic physics podcast about quantum physics. And while listening to Arcade fire and playing geometry wars I may very well have figure out the universal theory of the universe (seriously).

The rest of the universe is actually... energy. Since E=mc^2, energy is the equivalent of mass. You cannot disregard energy because it is in a slightly different form than mass. My proof for this. Light is bent by gravity (shown in books I've read with star light being bent around the sun during eclipses). According to Newton, everything has an equal and opposite reaction, therefore light pulls on everything, leading to energy pulling on everything. EVERYTHING IS EVERYTHING. Nothing in the universe is different than everything else.

Why does everything being waves make so much sense, because waves are NOTHING. Where did the universe come from: NOTHING. NOTHING=NOTHING. How do you fit nothing inside something the size of the head of an atom? You don't, you never could, you never will, it can't happen. How big can the amplitude of one tiny little wave be. It can be as big as you want, as big as the universe. Infinity is infinity, numbers go as high as you like.

Hopefully I just figured out all question concerning the universe.

Please comment with anything that might be helpful in proving me right or wrong.
(This means you Steven)

( I also like my theory since it requires no extra dimensions, no strings, and no dark matter)

Well it only took a few months, but for once we didn't have an old life drawing model (probably since it was life drawing with costume day). Bonus, we were allowed to use coloured media and paper. At first the blue on brown nearly burnt my eyes, but with the white it got alot better.

Also, my final painting is started. Should be finished by next week. 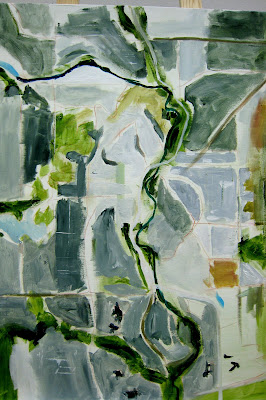 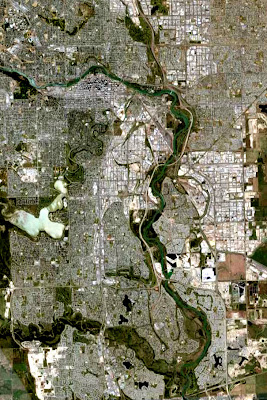 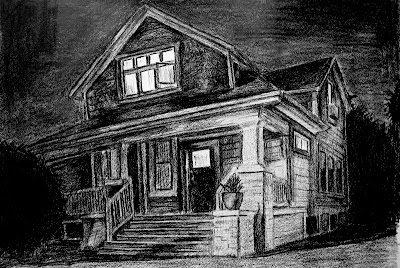