In the old days, to make a photograph, photographers had to be very skilled.  They had to do everything manually.  Figure out exposure and the development process just right to make a picture.  But photographic technology developed.  Slowly, everything that was once hard became easier, and easier until today, every single step is automatic, down to detecting whether or not the person is smiling.

I suspect that if i had been born about 80 years ago, I would have been engrossed in photography.  But today I can't really be, almost everything has been figured out.

However, I have gotten myself into a field which has the same characteristics of that photographic era. Computer animation is a very similar, very technical skill that only a small percentage of the population has figured out.  It's part art, part technology, and delves with image creation.

The question I wonder is if and when and how 3d animation will be made easier, and if it will ever get to the point where anyone who wants can use it as a powerful tool.  I suspect that being on the forefront of bring this type of high technology to the masses would be a good place to be.

I don't think I have the patients for that.  That is three hours a day for ten years.

That always made me feel a little bit disheartened because who doesn't want to be a master at something.

But today, I realized that while I may not do ten thousand hours of one thing.  I am lucky enough to have chosen a life where I am very slowly building up an enormous amount of creative hours.  I am always drawing, making things in 3d, writing scripts, playing music, recording sound effects, taking pictures, getting inspired by other art, writing blog posts, writing programs and doing any other number of things.

And I think they can all apply to the same big pot of animator ( animator to me is very broad right now ).  So in no time at all I will have ten thousand hours working at animation.  I won't say I am master than, maybe when the scope is so broad and wide, maybe I will need 30000 hours.  But at least I am working my way towards that. 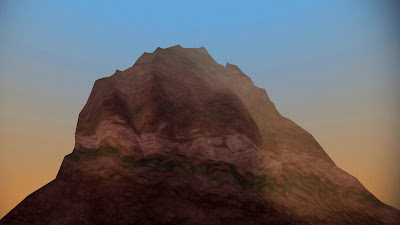 It's not much of a mountain.
I made one important discovery.  Adding atmosphere and color to the air is integral to make the image come to life.  It is very easy to make images with extremely even tones in 3d software.

Starting From Less than Scratch

My time in the mountains is serving me well. Next year my main project is one large animation. By large I mean solo project large, so about 5 minutes or less. In the itinerary for this summer is the initiation of that project. I will have free reign, I can do whatever I want. All the animation paper is completely blank, all of the free space on my hard drive is still set to zeros.

So the questions is where to begin.

Any creative project will be formed by everything that comes before that project. I heard an interesting story about Mark Twain. Apparently, he got stuck while writing Tom Sawyer. He felt he was empty. Left the manuscript for a time, and when he returned later, he felt his tank was refilled, and it was easy to proceed.

This summer I feel like it started with a formatting (the computer variant). Everything was done, my ideas were cleaned out, I knew what was important to me, but beyond that I had very little to inspire me.

As the summer has progressed I can tell that my tanks, and reserves of creativity are being refilled. The scenery of the mountains is seeping into my eyes and filling me up.

In my basement apartment in Field, I found a textbook called Freedom of the Hills. It is a book which describes in great detail nearly all aspects of mountaineering. From what to where, how to find you way, how to climb and what to do in case of emergencies. I am slowly plodding my way through the entire thing. Learning about the mountains from this perspective of mountaineering makes them much more complex. A rock face is no longer just a cliff, it becomes something to climb, rappel or something to avoid.

While I do have a little interest in actually doing some mountaineering, I am more intrigued by the prospect of animating it. If your actually going to go out to a mountain, you might as well film the actual thing. But the risks are generally greater than I am willing to take at this point. Seeing if I can imagine the experience, from enough research and thought, feels like an interesting challenge.

I also find that mountaineering is a wonderful topic for animation. It isn't just walks and runs. It is walking up piles of boulders; carrying heavy packs; jumping over chasms; falling down slopes. It has avalanches, search and rescue. It has climbing. Ropes. Rockfalls. It has wind, rain, ice, snow, sun. It has teamwork, leadership. Decision making. Risk. Reward. Failure. Death. Success.

One aspect of Mountaineering that is a little out of line with how I think is the reason. I read the book Into Thin Air, about a failed guided expedition up Mount Everest. I don't find their motivation for wanting to climb Everest compelling. "Because it is there" is an interesting reason, but it doesn't quite convince me.

So I have a setting and a general idea of the topic area. I still need a story, that will come.

What I have also begun is searching for the right medium.

So I started from scratch. I found a rock outside and decided to start there. How could I represent that. I went on the computer and tried to model and texture it. And I realized that at the base level of computer graphics, the one that is popular, that is taught everywhere, just wasn't working for me. I still haven't been able to make a rock in 3d that I am satisfied with.

In another post I will describe my thoughts on the topic.

I like the title of my blog.
It's right, and it always needs to stay.
The added words show the flexibility of language.
Each word is in the thesaurus entry of the next.