This was the result of sculpting in a very peculiar way.  All I did was start with a cube and than removed ellipsoid shaped chunks one at a time using Boolean commands.  It is a very different way of working and feels quite natural,  I need experiment a lot more, but it is a start.

I heard a news story today about the super rich actually suggesting that they would like to pay more taxes to help society.  And it got me thinking about the implication of wealth, about how wealthy people can actually get and what the alternatives would be like.

My instincts about numbers suggests that something is wrong,  people aren't created exactly the same, but one person is not a million times better than anyone else.  They can't work a million times harder.

When a person becomes super wealthy it is because they find a crack in the system of society, or in the earth, and out gushes money, whether it is from the ground or wallets it doesn't really matter.

I don't think I would want a system where there were no chances of striking it rich, because that is the type of reward that drives people to create great things, the problem is the feedback loop which is caused by money.

Those who have money gain the ability to make more and more of it.  With money comes the power to make more money.  Suddenly the wealthy will become super wealthy and a huge disparity opens up between the rich and the poor.

What type of solution is there to this?  Taxes.  Curently taxes level off at a specified level of income, and after that it is smooth sailing to make more and more money because it gets easier and easier to come by.

But what if taxes got harsher and harsher, what if taxes increased super linearly, exponentially, so that super-rich meant a much lower number.

Once you are really rich I don't think your goal should be to make any more money.  The more you have the less other people will have.

If you are still very concerned with money when you are super rich, it is time to reconsider your purpose, and notice that everyone around you is trying to make their way, and you have the power to make it much more difficult, or much easier.

There is no way to be super rich, no way to be bigger than life,  there is always some trick to it.  It's an illusion that casts a powerful spell.  But there is no such thing as magic.

This video just somehow happened to me last year when I was in the parks all summer.

It's the weird me that doesn't come out in public very often.  How very peculiar.

Gel Sight - Something for artists


I saw this video and realized that there was an incredible powerful application for this technology  that can sense the most minute touch input.

Suppose that you had a one foot square piece of this material on the desk in front of you with a camera underneath capturing the touch sensitivity.  Next there is a projector above projecting a computer image down onto the top surface of the material.   And now you have your fingers and paint brushes and whatever other tools you wish to use to touch the gel sight material with.

The computer can detect the position texture and strength of the slightest touch.  It uses this input for a drawing program that creates a beautiful digital image with 3d texture.  The projector above is calibrated as to project the image directly back onto the working surface, allowing you to see the result.


This would be an entirely new level of digital art, giving it so much more depth and subtlety.

Well another idea to put on the giant pile of ideas.

Most of the Leg

I think I am starting a new project.  For some reason I actually think I started this project once before, but it never got going.

I'm going to go through human anatomy in 3d.  Piece by piece until the whole human figure is complete.  I'll start really easily, with just bones.  But as I get further, I will rig the bones together so that they move as one.  And than model the muscles.  And hopefully rig those as well.

I get the feeling that if I can model the human body in 3d, from the inside out, not just a thin outside shell, I will end up with something.

I am doing it simply in 3d, with polygons.  Nothing smooth.  I will see how much can be said with polygons because they have intention.  If I let things get smoothed, everything I put in will get glossed over by an algorithm.

Magicians should only reveal their tricks when the trick itself is beautiful.  I'm not really sure what parts of the 3d modelling process are beautiful.  I started with a cube and added loops of division.  I pushed and pulled the new points that I had created in space to adhere to the surface of the bone I had in mind.  I spin the model in the computer, and as it moves I am able to see the 3d shape of it even though it is a two dimensional image on the screen.

The 3d shape begins to feel more and more real as I increase the detail and precision of the model.

Here is the first femur. 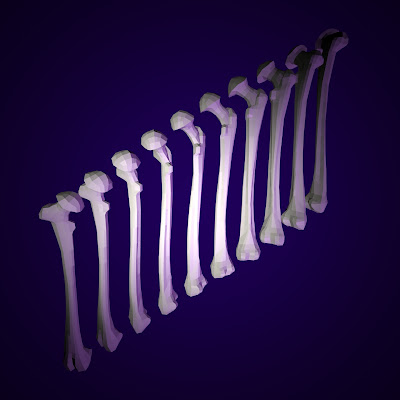 A New Place on the Web

I've known for quite a while that I would need to build myself a more official place for myself on the internet.  It was only a week and a half ago that suddenly the design took shape in my head.

I wanted to make the design of the website somehow be essential animated.  I ended up needing to teach myself about the entire topic of web design to make it work.

Like all art, I ended up learning a lot about myself making this site. I think I really represented how I feel about animation with this site.

I hope you enjoy it kylerkellyanimation.com