New way to texture, and gosh, isn't that nice 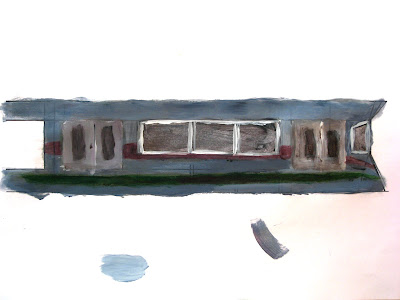 I'm usin' real paint in my new 3d movie, this is a tentative paint job for the train. 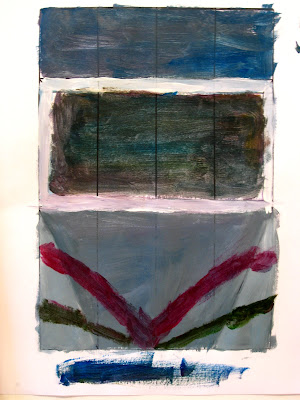 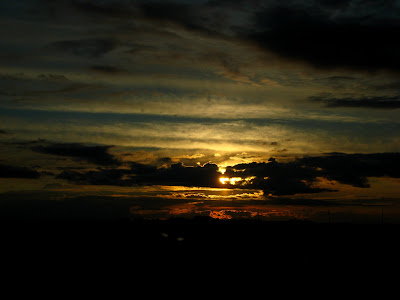 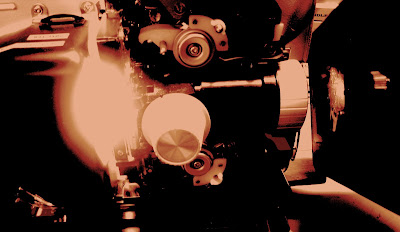 Well I got my grandfathers film projector setup, it is pretty cool. Here is just a very edited version of it. 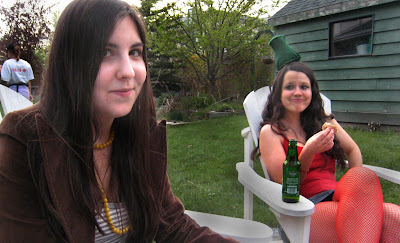 And here are some pictures from Travis's awesome music party. The point was to dress up as a band name (not a band). Ada was a red hot chili pepper, Travis was Franz Ferdinand. Lauren was something velvet. I was spoon. 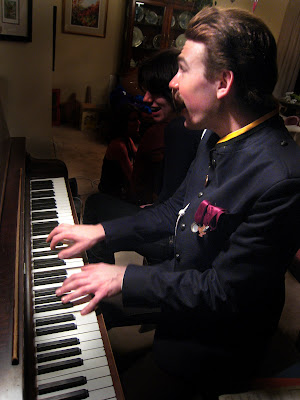 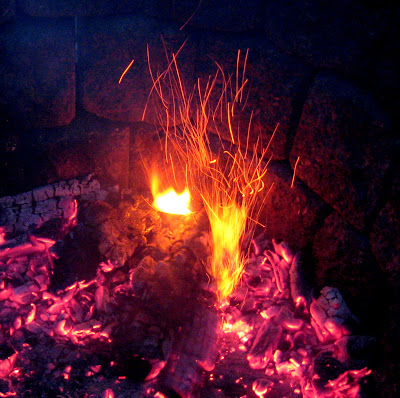 We had a fire at the party.

The week previous, he had gone to the hospital for more minor chest pains and heart problems. Thankfully we had decided to go see him at that time so we got to see him one more time before he passed away. He died of a heart attack.

I will assume that most people have gone through the familiar funeral process and ceremony, which works fairly well to cope with the loss. What I really would like to discuss is how I think I coped with it differently.

To begin with, the first night we heard the news the really big issue that hangs in the air after everyone has cried and just sat around for a while is "what do we do?" We had phoned everybody already and the funeral was going to be in Edmonton and nothing could be planned yet. We couldn't simply watch TV, it just seems like the wrong thing to do. So I decided to hook up the computer to the TV with a VGA cable, and watch the Planet Earth Documentaries our family had wanted to see all together. When some of those were done we just sat and looked at all of the pictures of Grampa that I could find on the computer. I cope with stress by hooking up technology.

Later in the week I used technology to cope with the funeral. First I made a slideshow for the funeral by digitizing pictures from old family albums. It was really very interesting to be able to have time to look through all of the old pictures. Our grandparents traveled alot, and I mean alot (every continent multiple times). There are thousands of pictures from around the world. 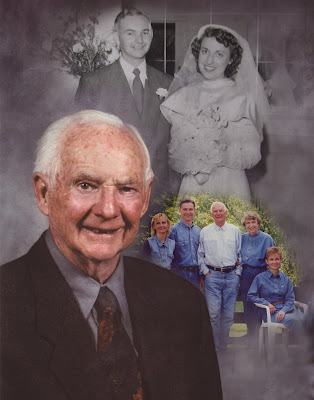 My brother and I also worked on making a memorial picture for the funeral, to sit near the entrance for everyone to see. Again it was a technology and design problem that really helped me get through this. 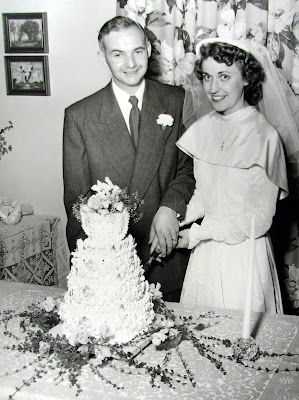 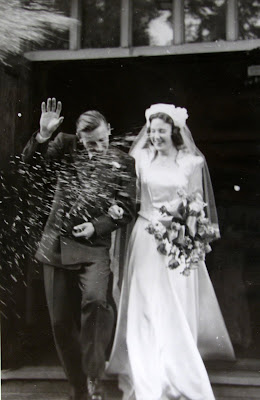 The final thing that I will be doing, and have yet to even get started with, is to digitize all of the old family home videos that my grandfather took. I was able to find in his basement workshop about 50 reels of film and various pieces of film projection equipment which my uncle showed me how to use. I am going to digitize everything and edit together some really great family videos.

There are many people around me who were hit emotionally by this death with magnitudes of force more than it hit me. I had had a brief thought the week before it happened, that if grampa was going to die soon, it would be right after being in the hospital. I was lucky to know my grandfather fairly well, and have been able to do a lot of things with him, but I think that as this process of looking back at all of his work, his films, videos and photographs moves on, the overall impact of his death on me will be increased. 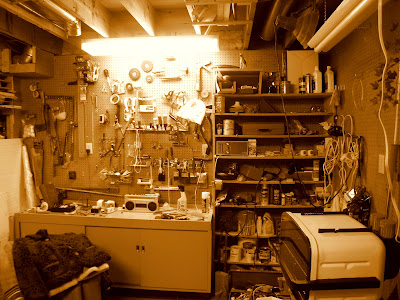 It is going to be different than if I simply were to have spent more time with him when he was living. It's going be be me actually looking and working with documents from before I was born, from times that stretch back from as far as the 1950s. It is the difference between me knowing my grandfather as a grampa, and me know my grandfather as a grampa, a pharmacist, a traveller, a father, etc. (not sure what will be on the tapes). 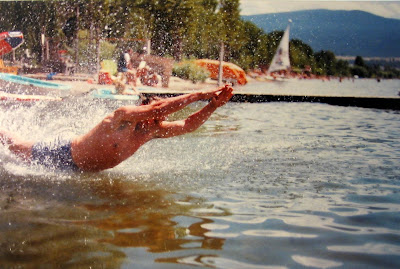 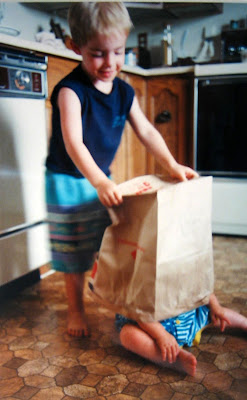 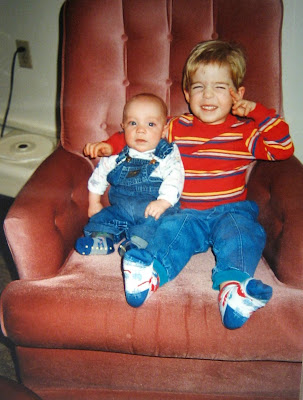 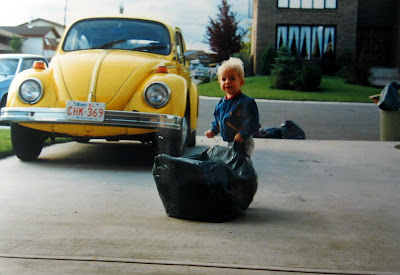 Before Christmas I helped digitize some of our old family pictures, I went through them and found some of the most interesting. I didn't actually take any of the pictures, since I was probably not born, or much too little at the time. 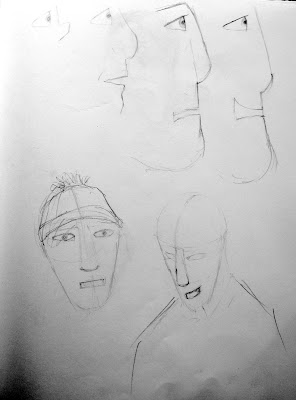 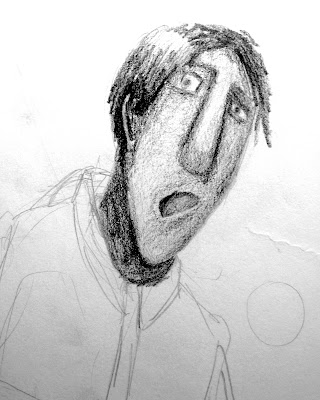 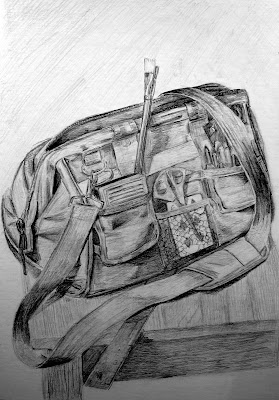 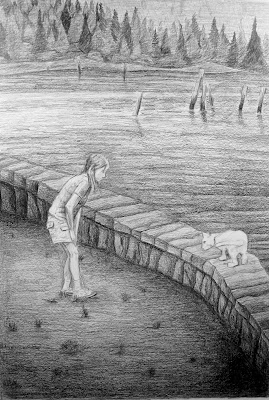 These are my last two design drawings that I did for school. Some of my favorites actually.
at Thursday, May 03, 2007 0 comments

My blog has been up for along time now. If anybody has any suggestions about it, I would be glad to hear. It can be about anything, content, form, whatever. Questions that need answering?