I have always been interested in robots, and mostly in how well they can get around.

And the thing that always disappoints me when I hear about engineers doing research with robots is that they always, always, fall back on the "it could be used for search and rescue" purpose of their creation.

It feels like a cop out of actually figuring out a real purpose. The likelihood of an incident in which search robots are actually necessary and available seems minuscule. I would much rather have everybody actually working on the rescue, rather than with some robots.

Just figure out a usage for the robots that is real and useful, and then get on with solving that problem. Hypothetical crumbling buildings is getting really old.

Well, apparently reading about memetics and being in animation school in a year has changed me.

I watched Wall-E today and it is pretty much a perfect movie. The only caveat to its perfect is the fact that it is a Pixar movie, which means that there are constraints on its design. Mostly being that it needs to feel like a Pixar movie.

Hopefully that helps explain why I thought it was so go this time around.


And also the animation is spectacular from a minimalist or formalist level.

Also, the story design of this film is incredible. Every little detail links together spectacularly. I didn't see all of these little links the first time through.


I guess everything deserves a second chance, except never approach it from the same angle, I'm fairly certain it was only with the time and new experiences that I have had that I really got that movie.

Now I can be over excited for Up.

Our current drawing project is to design a family. Here are some images of the progress. 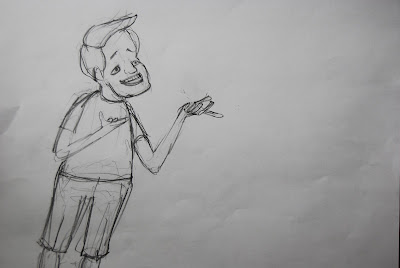 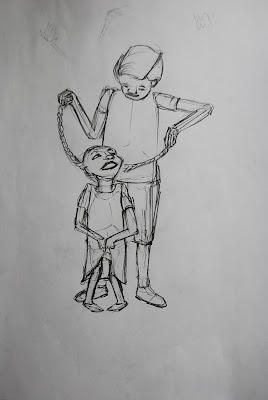 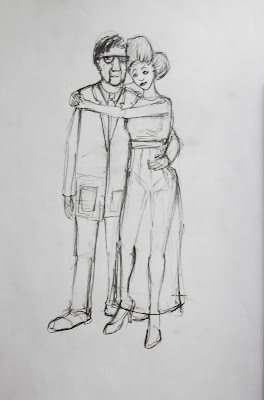 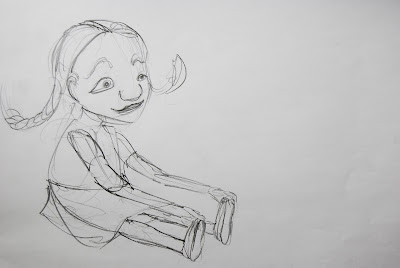 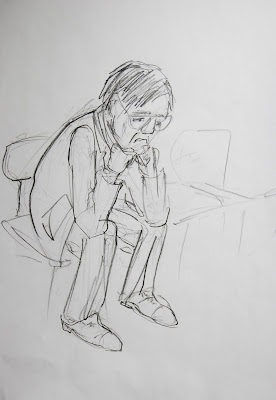 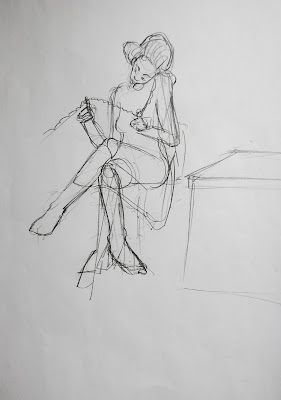 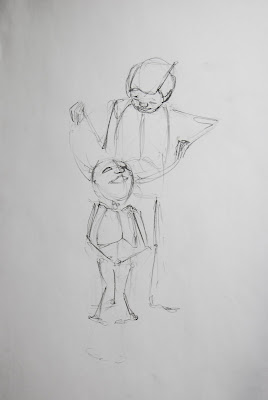 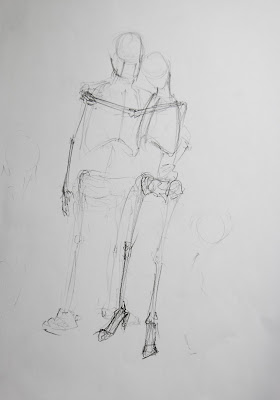 I find my skeleton drawings quite appealing.

I also found it weird when my drawing teacher said that my character design had "dark" undertones. That isn't something I would have thought.

Dangers of a Digital Work Flow

With film, you have roughly two choices when it comes to image quality, 16mm or 35mm. Which is pretty much a choice between good and great.

With digital, there are roughly an infinite number of choices ranging from horrible to good, and if you try really really hard and have lots of money, great.

Now imagine the set that occurs after after you have your footage and are editing and making copies of it. With digital, you are force to work through all sorts of menus and choices of quality, file formats, bit rates, types of bit rates, types of compression. All of the options are pretty much related to how much you would like to wreck your footage.

With film when you get a copy of your film, the most choice you get is how you might like to adjust to color and exposure so that it looks better. Other than that, you don't really get any choice, the lab does all the work, and they are going to do a good job because you pay them to, and you can reject the work if it isn't good enough and they will do it again.

So on one hand your choices deal with how much to wreck your work, on the other, choices that lead to it looking better.


And finally. Imagine you are a student making a movie. Suppose you make the whole movie on film and it works out really great. You want to submit it to a festival. It's on film, so the quality hasn't been wrecked and really the only issue is sending in your film as is.

For digital, your film might be great, but the quality of the picture could suck if you chose the wrong format at the beginning, or did use the right settings. You are going to have to make sure the formats match with what the festivals want. It might be quite a painful process.


So what is a filmmaker in this digital age to do?

I think the best choice is to go crazy with the image quality on the computer. Hard disk space is cheap. Understand exactly what you are doing, really read up on the whole subject and become well informed. Just because computers seem easy to use doesn't mean that they are. They are hard and difficult and will screw you up when you least want them to.

And finally pay attention to what you are looking at. Don't just think that the numbers and words and settings will make everything work. Be the final judge of your work and don't settle for quality less than great.

Most things you read about Myers-Briggs explain the whole thing wrong. The best websites to actually understand what all the letters mean is Jungian Function Theory.

The basic premise is that there are four functions of your mind.

And the idea is that any of those four functions can go off in two different direction, either "introverted" or "extroverted".

Now with all of this information you can figure out your Myers-Briggs Type, which is complicated and explained in the link.

So if you understand all of this, the fundamental difference between all people according to this theory is what values the introversion and extroversion are set to. So I started to think how this could be explained by the physical design of the brain.

The brain is a network of neurons that are linked together. I know very little about this subject, but I know a fundamental fact about all networks and circuits. They come in two varieties, Parallel and Series.

I think the strongest example I have discovered is between myself and my friend Stuart. He is an INTP, I am an INTJ.

This means that he has an introverted Thinking function, while I have an extroverted thinking function. Now compare the way that we think of the area in which we live. When I imagine this section of the city, I can thinking of a 3d map of the entire area. In the brain, I supposed this would be a very interconnected mesh of memories that I can access at random and easily navigate my way through. On the other hand, Stuart describes his thinking of the area as more of a set of directions which guide him from location to location. He knows how to get from A to B to C, but does not immediately understand how to get from A to C. His thinking function is designed in a serial sense.


How about another example to explain the Sense function

Stuarts Sense function is Introverted, in serial. When he watches a movie he often hears sound effects that have been used in other movies. This is dues to his memory of the sound being directly linked in a serial manner to the old memories of the other movie. I on the other hand experience the sound in a more fresh manner everytime, and am more inclined to simply listen to the sound and hear it along with everything else that is going on.


How about the Feeling function?

An extroverted feeler will thinking about a wide range of people, and how they all interact and relate to one another. They are making lots of connects that all happen in parallel. An introverted feeler will be set off by an emotion that recalls past events and feelings, they will get into a series of memories by one single event.

And just to complete my descriptions, Intuition.

When I thought of this theory I was in the shower. I had been ingesting ideas and thoughts all day, letting them simmer. And then once I got into the shower all of my thoughts combined into once single strand that held itself together as one cohesive thought. One nice serial idea. As opposed to a whole picture of the world in general, it was one cohesive thought that gelled in the intuitive part of my mind.

Well reading week is over. Except for me it was animation week. I had this weekend booked in the camera animation room. So I spent the week preparing, which meant drawing everything for my movie and testing those drawings. And with everything as prepared as I could be, I shoot my movie on the Senior Oxberry Camera that our school has.

This animation shoot, on an animation stand with a real film camera is really the centerpiece of the first year of animation at Concordia. It took me roughly twelve hours to do my animation of roughly 45 seconds. It was extremely stressful, tedious, nerve racking. It was the weekend, so my only resource if something went wrong were my teachers phone numbers (which I only needed to use once). And we are working on film. You really only get one shot with film. You need to know what you are doing, and execute it right a few hundred times.

I am getting pretty close to understanding why that ordeal was worth going through. I'm not really sure how my film will turn out, and I am really not all that concerned with it. I'm only now recognizing that it really is my first "film" animation, the keyword being film. I shot my whole movie with my digital camera, yet I'm certain it didn't produce the same experience that I had when I shoot on the massive camera.

I think the key difference is that when you make a film animation, the only way that you will actually get a result that is close to your intention is if you have a deep understanding of what you are doing, and what is going on. Working with computers, you can often stumble your way through most of the process without ever really proving that you understand all of the basic elements.

What I think I can take away from the the experience is that film animation, on film, is not really a practical method of making movies anymore. It is extremely tedious, strenuous, allows for no mistakes, and is really boring at times. Computers on the other hand hold none of that fuse, and make life much to easy for beginners. So hopefully a solid fundamental knowledge of the field, with this hands on medium will provide a solid understanding for what comes later.

Ok, picture time. Maybe when I am more lucid I will write more about the subject. The first images is of the folders that had my whole movie in them. And click through the photos to see more images in the picasa web album. 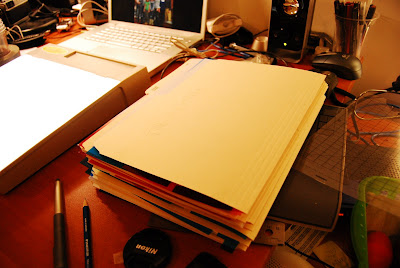 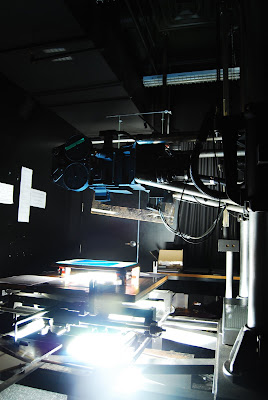 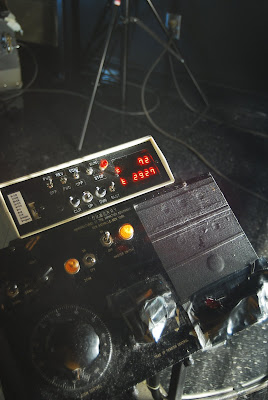 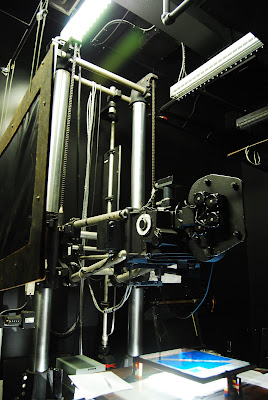 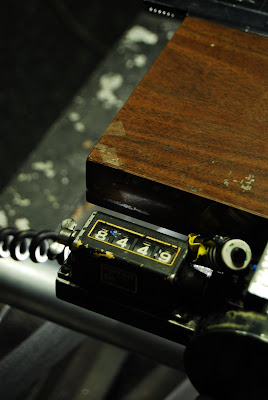 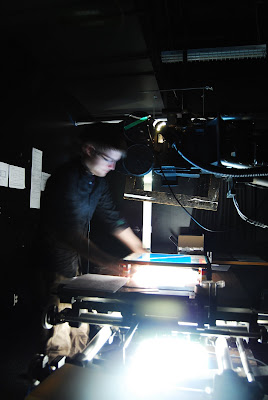 And my film is title "The Crescendo Step" if your wondering.